Home / 'Eyes without Sparkle - a journey through postnatal illness' / Putting my own oxygen mask on – why I had disappeared!

Putting my own oxygen mask on – why I had disappeared!

For many years now I have spoken about the need to look after yourself so that you can look after others. An analogy I often use is one that was passed on to me, ironically, from my late partner, Clive Gott. He used to talk about how the safety drill on aeroplanes is the requirement to put on your own oxygen mask in an emergency before helping others. It is not about being selfish – quite the opposite in fact. The initial rule in First Aid is to ensure your own safety so that you do not become another casualty. You cannot help others if you are not in a position to do so. The same applies in all that we do.

In the light of all the dreadful events in previous weeks of the terrorist attacks and the fire in London, I feel that we are all perhaps feeling far more aware of how precious our lives are and how quickly our loved ones or ourselves can be taken.

The first weekend of May, we had our own family crisis. My brother Kevin has lived with my parents the last 5 years in between his travels abroad. He loves to teach in faraway places. In April, he set off for a new post teaching deprived children in Ecuador coastal towns. He went via countries such as Bali and Vietnam. Sadly, he did not make his destination as he became very unwell. For almost three weeks he had a violent stomach upset and attempted to get treated. I guess he kept putting it off, hoping that ‘tomorrow’ he would feel better. As a family, we implored him to come home. He arrived back at Manchester airport looking like a corpse! How he made the journey is quite incredible. We took him straight to A & E. 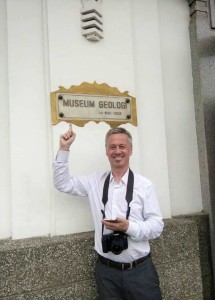 In Bandung just before he was ill

He has spent the last seven weeks in the Royal Liverpool hospital. Within a couple of days in hospital he required life-saving surgery and we were told that his chances of survival were very slim. My parents, sister and I spent the whole night sitting up at the hospital as he was operated on, not knowing what the news would be. I know that the rest of the family were also up all night, praying and waiting for news.

He survived the operation. I have never seen anyone in Intensive Care before. It was a shock. He needed far more than just an oxygen mask! We were told that each day his chances improved. He was then moved into High Dependency Unit and finally into a ward in an individual room. For weeks, he continued to fight the infection that had destroyed his digestive system. In the interim we all had to support each other. The worry and concern for Kevin’s health was exhausting. Each visit was like a roller coaster ride. Depending on his mood or condition, you could feel a tiny sense of relief or an even bigger knot of worry.

The Royal Liverpool hospital is about a 45-minute drive. As he was so ill we could visit at any time, so big chunks of days vanished. Our parents were dreadfully upset to see him so ill. That upset me! I wanted to help and support them as much as I could, as did my sister Claire. We ensured that he had a visit from someone at least once a day.

Meanwhile the teams involved in his care at the Royal Liverpool hospital were amazing. The long hours of service and dedication they put in is truly incredible.

I found that I wasn’t sleeping because the image of Kevin in his hospital bed with all the drips, tubes and monitors, kept haunting me. I found the best way to deal with the worry was to get busy with physical tasks. That helped me to sleep too. I know that if I become too tired then I am in danger of weakness myself. I needed to stay strong. I have been enjoying my two retail jobs at the Devonshire Bakery and One Stop. I have found that the tasks there were almost therapeutic. I also must say that the concern by my colleagues was also wonderful. Even though they do not know my brother, every shift people would ask how he was. I also learned some sad stories about relatives in their own lives.

I found that I had to keep away from social media and my usual posts around perinatal mental health have needed to go on the back burner. I could not focus due to worry.

The support from my close friends has also been much appreciated. They know what a close family we are and how this would be a blow to us all.

By the middle of last week, the infection had been sorted! Kevin then began to feel much better and as a result has been discharged! He is back at my parents who are now his carers. Who says at 79 and 80 your parenting days are over! Mum is up and downstairs now umpteen times a day, along with healthcare professionals popping in to see him. In Kevin’s words, he says he looks a prisoner of war. He is dreadfully skinny, very little energy or concentration and needs building up again.

Unlike some poor families, we do have him still with us. We must keep that in perspective. I know the pain of loss from when Clive died. He didn’t look after himself as well as he could, resulting in furred arteries and heart failure. He didn’t apply his own oxygen mask. The photos of all those killed or still missing from recent tragic events, reminds me to feel grateful for my brother’s survival. It reminds me to feel grateful for my own life and my loved ones.

Our human society must be built on caring for and loving others. That’s why it also hurts so much sometimes. Visiting my brother for so many weeks reminded me a little of how helpless my family must have felt when I had 8 weeks in a psychiatric hospital after my son was born. I guess I never really appreciated until now, the ripple effects across the whole family. Also for friends who are also anxious to hear what is happening.

As Kevin now starts a long road back to recovery, I thank all the team at Royal Liverpool for his care and for literally saving his life. I thank the rest of the family, friends and colleagues for their support and kind words. Most of all I thank our incredible parents for their ongoing love and care. I wish them and Kevin strength and encouragement in the weeks and months ahead.

I shall endeavour to get back into the Perinatal Mental Health world now. My passion remains and is renewed!

So, I ask you today:

None of us are indispensable. Please consider taking good care of yourself – if not, the outcome for you and your loved ones could REALLY hurt!

2 Comments for Putting my own oxygen mask on – why I had disappeared!


Thank you Elaine for sharing your wisdom with this beautiful blog. You’re absolutely right: in our demanding society it is so easy for many people to forget looking after themselves, which is our primary responsibility to be able to look after others. The London recent events also made me appreciate Life more deeply than ever. We should never take anything for granted but be grateful for what we have and consider life a precious gift to constantly nurture. Your parents are amazing and both you and your brother have certainly inherited the same inner strength and caring nature. I wish your brother a full recovery and you and your family peace and serenity. Love, Antonella


Hi Elaine, thank you for sharing this. Nearly four months on from losing my wife from breast cancer this is an excellent confirmation of what my lovely Lynne called ‘Plan B’ and FFSS – the family and friends support system. Very much in tune with the approach Clive Gott had to life. So I’ve posted this to the Station House NLP Practice Group. Much admire your work on mental health. Regards Mike.