One of my favourite programmes in recent years has been ‘Call the Midwife‘. I have every episode saved! Often I need a tissue because a story has touched me.  I love spotting some items I recognise from my childhood days from my grandparents. Two weeks ago, when the main character lost her boyfriend following an accident,  the line of advice ‘just keep living until you feel alive again’ was fabulous and moved me. What wonderful words. 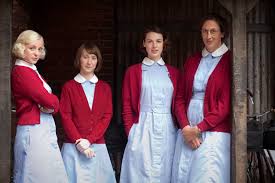 The episode I just watched reduced me to a sobbing wreck! It was because they portrayed a story of a new mother who developed puerperal psychosis, as I had done. I truly hope that there are thousands of people more aware of this illness now. I was enthralled in the way they showed her rapid deterioration; her obsessive and irrational behaviour, culminating with a near suicide and infanticide; the fear of stigma and disbelief of the father; her admission to a psychiatric ward and then treatment for electro-convulsive therapy followed by showing her recovery.I have campaigned for many years now to raise awareness of this awful illness especially because it can lead to death and I know the pain that bereavement brings.  I also know the guilt, shame and stigma that can surround a person who is diagnosed with a mental illness.

The scary thing about the episode tonight is that this illness is still relatively unheard of. I related to the wandering in nightclothes (although I did not take my son with me); I related to being hospitalised without him and the ache of hugging a pillow because the pain of separation is so bad; I related to the injection of anesthetic prior to ECT; I related to visiting times in the hospital; I related to recovery. I know by the stream of comments on social media that I wasn’t alone.

What the public may not be aware of is that due to services being deemed as ‘not needed’ in the majority of the country there are no specialist Mother and Baby units where such ladies can be treated without the pain of separation. Often ladies have to travel for long distances to be treated (if they can get a bed) and the impact that has on them and their families is huge. Where such units exist, many of their former patients say that the service has been a life saver. Let’s hope that going forward the commissioners and fund holders within the NHS recognise how vital these services are.

Some people may have been horrified by the use of ECT. Yes, it looks barbaric and yes they still do use it. I have to say that it worked for me.

I loved the programme tonight because it also showed hope. That was why I wrote my book ‘Eyes without Sparkle – a journey through postnatal illness’.  This documents my experience of the illness. A few weeks ago I got a call from a very worried lady whose daughter had been diagnosed with puerperal psychosis.  I was able to encourage her that it can be treated and you can get better.

The best resource for puerperal psychosis can be found at Action on Postpartum Psychosis .

I am currently working on my next book which will be a guide for those who are contemplating another pregnancy after challenges with a previous one. Have a look at earlier blogs for details.

Who do you know that you can share this information with?

8 Comments for ‘Call the Midwife’ highlights puerperal psychosis – thank you!


I didn’t see the programme however after having postnatal psychosis 7 years ago can absolutely relate, the hospital experience was one of the worst experience,’s of my life, scary beyond words being locked up without ny baby in a mixed ward with people that had severe mental illness not related to child birth. Hallucinations paranoia delusions sleep paralysis panic attacks not good… however there is a light at the end of the tunnel I did recover naturally and went onto have a beautiful home birth experience with my daughter Lily 3 years later and came off meds after 3 weeks. Recommend looking into personal development and the law of attraction for anyone still suffering 🙂 thank you for all you do Elaine, I’d love to help any way I can with your new book too.


Thank you so much. I will send you the link to the survey.


Read your entry after seeing a link on CTM Facebook page. If only there was more awareness to this then so much more could be done to help women and families diagnosed.
I have not suffered with the illness myself just mild PND with my first pregnancy, and I felt hopeless and alone so cannot begin to fathom what you and other women have been through.
Keep blogging and writing as you have touched so many lives and are helpin women everywhere to know they are not alone and there is a light at the end of the tunnel.


Great to hear people speaking out and widening the knowledge of perinatal illness. I also suffered with signs of Pueperal psychosis a few days after having my little boy. I was very fortunate to have an amazing strong family around me who sort the right help and I was admitted to a parent and baby unit. It was traumatic experience but the service re-built me (with short term medication) and I became the mum I always wanted to be.


Thank you for sharing another story of hope Holly!


Elaine wasn’t it great to see PP highlighted on Call the Midwife? Tears and tissues in our household for sure that night! Thanks to all involved in producing the show for highlighting the condition. Every bit of exposure is just one step closer to demystifying the illness for those who might be confronted by it in future, or indeed struggling to come to terms with it right now. Hoping the new book is making good progress!


My mother was hospitalised with puerperal psychosis when I was nearly one year old. It had gone denied and neglected for a really long time. The separation of mother and baby that ensued continues to have such difficult consequences for us, and I am now 28 Such a relief to read this post and it’s drawing attention to the need for mothers and babies to be together as far and as much as humanly possible, even during such terrible times.