#HopeDec09 – a day to celebrate and inspire in perinatal mental health

For the fourth day this week I was in London. This time for an event held in the House of Commons and put together by Dr Raja Gangopadhyay. 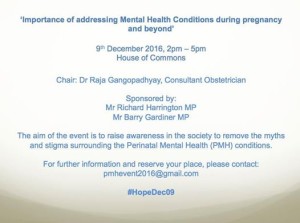 I met up with Bev Waterhouse, a midwife from York with expertise in perinatal mental health. We made our way to the Houses of Parliament and I was excited to take her inside.

I was so confident having been to Parliament a number of times now – and took us in the wrong way! The event was at Portcullis House across the road – that will teach me to read information properly!

Luckily once there we saw Lindsay Robinson in the ‘pass area’. She let us in! We then had a tasty lunch. People began to assemble outside the meeting room. It was great to see so many passionate people there. Dr Raja welcomed everyone – around 150 people. It was his idea along with sponsorship from two MPs, Richard Harrington and Barry Gardiner to have the event. They didn’t attend – a pity.

These are the notes I took:

The first speaker was Giles Berrisford who began by talking about his introduction to perinatal mental health and aims for the next few years. Next was Dr Alain Gregoire. He reminded us that all women have access to a range of specialists for their physical health around pregnancy yet their mental health is neglected. Things are changing! He urged us not to leave the building until we had spoken to at least 3 MPs! Fewer than 50% women are recognised and even less get treated for perinatal MH. We know what to do – if it was heart problems in men the NHS would be shut down! A radical shift is needed in maternity and psychiatric services. The impact on children can last into adulthood. We need to modify it. Great point that when we are asked about our children, we mention their happiness, sociability, etc. Their mental health – not, for example, their liver function. It is important. It is almost unimaginable to know how women want to end their lives. Such torture for them and their families. So many reasons for us to care and end the suffering. Let’s take action and make it stop.

Next we heard from Antoinette Sandbach, who is the Conservative MP for Eddisbury, who had lost her baby. She pleaded for kindness and compassion from staff who deal with bereaved parents. She suggests we stand as an MP. We have some of the worst baby loss figures. We need to have prevention and funding; clinical care and facilities. Bereavement training not required by midwifery and GPs as yet. It needs to be statutory. Professional support should be available for all who need it. Keep pushing for change. She had an excellent motivational message.

The next speaker was a lady whom I have admired for many years. Professor Vivette Glover from Imperial College, outlined the impacts of poor perinatal mental health on the baby. Take a look at www.beginbeforebirth.com. She urged for everyone to get involved in pregnancy care – family, employers, family, mother herself. Huge public health implications.

Lesley Page, President of the Royal College of Midwives, spoke briefly about her desire to get society involved in the emotional support of pregnant women. Also her work to push for better care from midwives with their relationships with pregnant women.

Sanchita Islam urged for education in schools on mental health. She suggests that the Samaritans have a specific PMH line. Talking to a kind person can alleviate a crisis. We have to prevent more deaths across the world. Singapore has some great ideas and initiatives that we can learn from. ‘Mood is like the weather – guaranteed to change’.

Sir Marcus Setchell, former Royal Gynaecologist, commented that we need to get the leap from awareness to getting good practices in maternity and mental health care.

After a break we heard from Lindsay Robinson, wife of Belfast MP, Gavin. She described her journey of PND and 2 years of waiting for treatment. Fear was her daily reality. Other heads nodded as she described having a bag packed waiting for someone to come and collect her baby, saying it was a mistake. Reading other experiences of women helped her to go back to another GP who helped her recovery. She now campaigns for better services – missed diagnosis instead of early intervention made her ill. Need education about PMH for all the family. Compassion, time and understanding for new Mums is needed.

Sue Atkins as a parenting expert, realises that we must find ways to support families. She offered her help on social media to raise awareness.

The antenatal journey was stressed by Beverley Turner who has show on LBC. Minds and bodies are connected so couples are helped to be confident, knowledgeable, control over breathing, meet others, partner to understand, etc. Thanks to a feed a Twitter for this photo.

Beverley stressed her belief of hypno-birthing and then the use of being able to calm oneself using breathing techniques as a new mother. She also spoke of the strength of language in the birthing process as it can defeat them, e.g. ‘I’m not allowed’. I have many references about language in my latest book.

Mark Williams described his journey of declining mental health after the birth of his son and PND of his wife. His plea was for funding and resources, research for fathers. He said that if they’d had my book sooner they may have had another baby. Thank you Mark for the mention. Earlier that day he, Matt Padley and Jessica from Cocoon had been on BBC2 Victoria Derbyshire talking about the need for support for fathers with postnatal depression. See the clip here.

Anna Day spoke about First 1001 Critical Days. Failure to bond can have detrimental bond on both mother and child. How do you tell people that you don’t love your baby? Abuse of babies is increasing. Impact on NHS and social services. Therefore we need much more investment for IMH – where it begins. 70% brain growth in 1st 2 years.

Raja had invited Princess Catherine to attend. Sadly she could not and he read out part of a letter from her office. 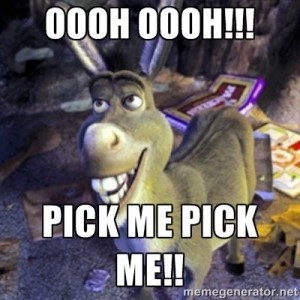 Raja summed up the day by making reference to as many groups of people in the room as possible. He acknowledged the strength of mums sharing and helping others. I admit I felt like the character Donkey in the Shrek films – I was so hoping he would pass the microphone to me!
Carrie Ladd  mentioned the better training and awarness for GPs, including the GP kit and learning modules. I’m delighted to say that both my books are listed.
Melita Walker mentioned the energy and passion health visitors have for perinatal mental health. There is also the specific training of champions by the Institute of Health Visiting. Asha Day said it was great to get us all here. We need continued hope, humanity and compassion along with a need to keep people well even before they are born.

Janine from Dublin said that they have the same issues in Ireland. She stressed the need to ask history of mental illness at booking and subsequently along with building trust and continuity of care. ‘Don’t hide behind excuses of no funding – asking ‘How are you can?’ be an easy thing to do’.

Charlotte Harding  told of of the work she and Mark have been doing to get a Mother and Baby unit for Wales. One of the ladies from Juno in Edinburgh explained that there are great improvements being planned for Scotland. She also gave credit to Rosey from PND Hour for encouraging so many to support others.

The impact of Birth Trauma was also acknowledged. Emma has made this:

Raja concluded by encouraging us all to seek holistic care of all. Our call to action was to share this information, and especially the latest report on why mothers die . 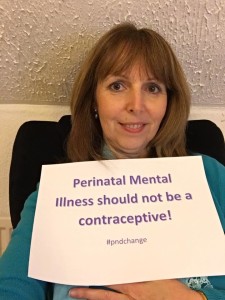 Had I been able to speak I would have stressed the anxiety that couples face in considering another baby after a perinatal mental illness. I was very touched by the messages on my Facebook feed about attending the event.

It was incredible to have so many people together from all walks of life and professions coming together.

I felt honoured and humbled to be there. I was overwhelmed by the mutual support and deep affection many of us hold for one another. The power of a ‘true’ hug between so many people who have suffered and/or supported others through perinatal trauma and illness is awesome.

I applaud and congratulate Raja on pulling together an incredible afternoon. Thank you to the speakers too and all those who attended.

I feel part of a growing force that HAS to make perinatal mental health better for all those involved.


Hi Elaine,
Inspirational words as always :-). You are an amazing advocate for the cause of supporting Perinatal MH. Look forward to chatting to you again at a PMH event no doubt in the near future.